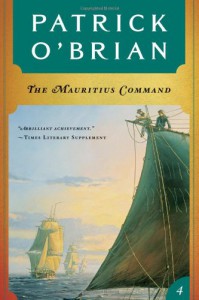 My love for these books seems boundless, almost paternal...so I feel harsh giving any of them anything but a 5 star rating and a kiss on the papery cheek. I'm trying to be objective, to take off my rose-colored glasses and view the work through someone else's eyes, someone who's not a hardcore fanboy, but goodness gracious, it's difficult.

Giving it the old college try, let me begin with the negative then...

The Mauritius Command does not hold the passion of the first three books in Patrick O'Brian 20 volume seafaring series set during the Napoleonic Wars. Love and its numerous forms, many of which appear in O'Brian's writing, is not a theme as strongly attended to as it was in the previous books. Sure, trace whiffs of it linger about in the form of our hero Captain Jack Aubrey's longing for his wife so many thousands of miles away, but love is not a motivating factor as much here. Fear of failure, not living up to the "manly" expectations of the day, and the burden of command, these are driving forces that move the characters through this well-crafted tale.

Certainly Jack and his ship's surgeon/intelligence agent friend Stephen Maturin are still solidly ensconced as our main characters, remaining as the heart and soul through out the series, however minor characters and their needs take hold of the narrative with just as firm a grip. Jack's need to succeed in his first chance to lead a squadron of ships is severely tested by his ability to handle personalities. These are not just chess pieces to be moved about and sacrificed with utter disregard. These are people, some quite prickly, and the somewhat ham-fisted Captain Aubrey must get the most out of them with a kind of delicacy that does not come naturally.

This is fiction, but fiction based to such an extreme degree upon actual occurrences that one could almost call it a non-fiction. For me, that's fantastic, because I'm "truth is stranger than fiction" kind of person. However, following the facts too closely can have an ill effect upon historical fiction, especially if it takes the wind of the sails of a ripping good yarn. Be warned, there's a touch of that within The Mauritius Command.

Regardless, this is another brilliant piece in O'Brian's masterful puzzle. As ever, his writing is superb, his characterization flawless, the flashes of action and adventure are fun and exciting. Setting descriptions of places the author has never seen are breathtaking. When I read these books I feel as if I've stepped into these exotic locations with Jack and Stephen, who have become so real to me as to be thought of as old friends.